The richly illustrated book, a collaborative project between Kumao, Stamps Gallery Director Srimoyee Mitra, and Stamps Professor and book designer Franc Nunoo-Quarco, is the first significant publication on Kumao’s work and includes a selection of works from across her career. The catalog includes written contributions by Srimoyee Mitra and NYC-based art critic Wendy Vogel, an interview between the artist and writer Lynn Love, and poems by the Ruth Lilly Poetry Prize Award winner Marilyn Chin.

A book launch and panel discussion with Kumao, Mitra, and featured writers Marilyn Chin, Lynn Love, and Wendy Vogel will be held at Stamps Gallery on Friday, September 30 at 5:30 pm. The event is open to the public and free of charge. Copies of the book will be available for purchase at the event, and a public Q&A and a book-signing will follow the discussion. An RSVP is required to attend.

Kumao discusses her work in this Q&A.

Why did you move to publish your work as a book format?

My exhibition, Real and Imagined: Fabric Works and Animation took place during the COVID-19 pandemic in 2020. This greatly reduced the number of viewers who could see the work in person. A catalog is a way to extend the life of the work beyond a time-limited exhibition.

What materials were used to create the artwork?

I use traditional quilting materials and tools – cotton fabric, thread and machine stitching – but I sew everything onto industrial felt. Instead of abstract patterns and designs, I create fabric cutouts of objects and I draw with the sewing machine. Using this as a visual vocabulary, I re-create conversations or interactions between people. Instead of words, the conversations use thread (pulled taut, dangling, knotted) and other textiles to visualize the emotional and psychological undertones or power dynamics.

The subject matter is sometimes heavy, and the thick felt serves to give the content some ​“weight.”

Chairs seem to be a common theme here. Can you touch on the meaning of the work?

I use chairs as stand-ins for people. I use a range of types of chairs and objects to connote different contexts: the home/​domestic sphere, the workplace, a medical exam room, a park, the Senate. They are often in conversation and situated in precarious positions. The images capture a single moment from a larger story, similar to a film still.

I was deeply moved and haunted by Christine Blasey Ford’s powerful testimony during the senate judicial hearings for the nomination of Supreme Court Justice Brett Kavanaugh. But I was even more disturbed by the response of the senators and the general public. I made several pieces in response to the spectacle of the event which took place at the height of the #MeToo movement. It was the inspiration for the title of the show and book. ​“Real and Imagined” is a direct reference to gaslighting and the courage of women who come forward to report abuse and assault amid public skepticism. It is a direct reference to how a woman’s testimony is received: Her account is accepted as truthful by many, and simultaneously dismissed as imaginary by the court of public opinion. Half of the population didn’t believe that her experience was real.

Stamps professor Franc Nunoo-Quarco was the book designer for this project. What was it like working with a fellow faculty member?

I contacted Franc because I knew he had expertise in book design and he designs catalogs for a lot of well-known artists, designers, and institutions all over the world. I was thinking about self-publishing a digital book of this body of work and I knew he had expertise in this field. Instead of giving me a short answer to my question, he surprised me with a very generous offer to design the catalog! He has been an incredible colleague and generous with his time and energy. It has been a fun collaboration. We have gotten to know each other as human beings, not just faculty. He really understands the ideas and appreciates the work.

You mention that Franc really appreciates the work – what is the design of the book like?

Franc knew that I was interested in a kind of minimalist design. It’s clean and it’s gorgeous! The focus of the book is the artwork.

Who is your audience for the work?

The work is designed to be appreciated by the general public as well as visual makers, artists, and designers. I think the symbols are universally recognizable and relatable (chairs, beds, roots, etc.) and the concepts behind the images are based on situations or conversations many people have had.

Viewers can see that there are two chairs, and there’s an expressive thread between them. They can infer that the thread is like some kind of thought, or what’s being said, or the dynamics of that relationship.

People read the work based on their personal lives, but their interpretation might also be influenced by current events, what’s in the news at the moment.

Is this project still ongoing?

I’ve started to animate the fabric cutouts, and it’s very much in process. The still images that are sewn become the seeds for the animations. I love the texture of the fabric and the luminous quality it has when illuminated from below or above.

What can people expect at your book launch event on September 30?

At the event, we’re going to be discussing the artwork and feminist approaches to art. The writers will discuss their approach to writing about the work and I will discuss how I got started working with fabric in this way.

Heidi Kumao: Real and Imagined is available for purchase from Maize Books. 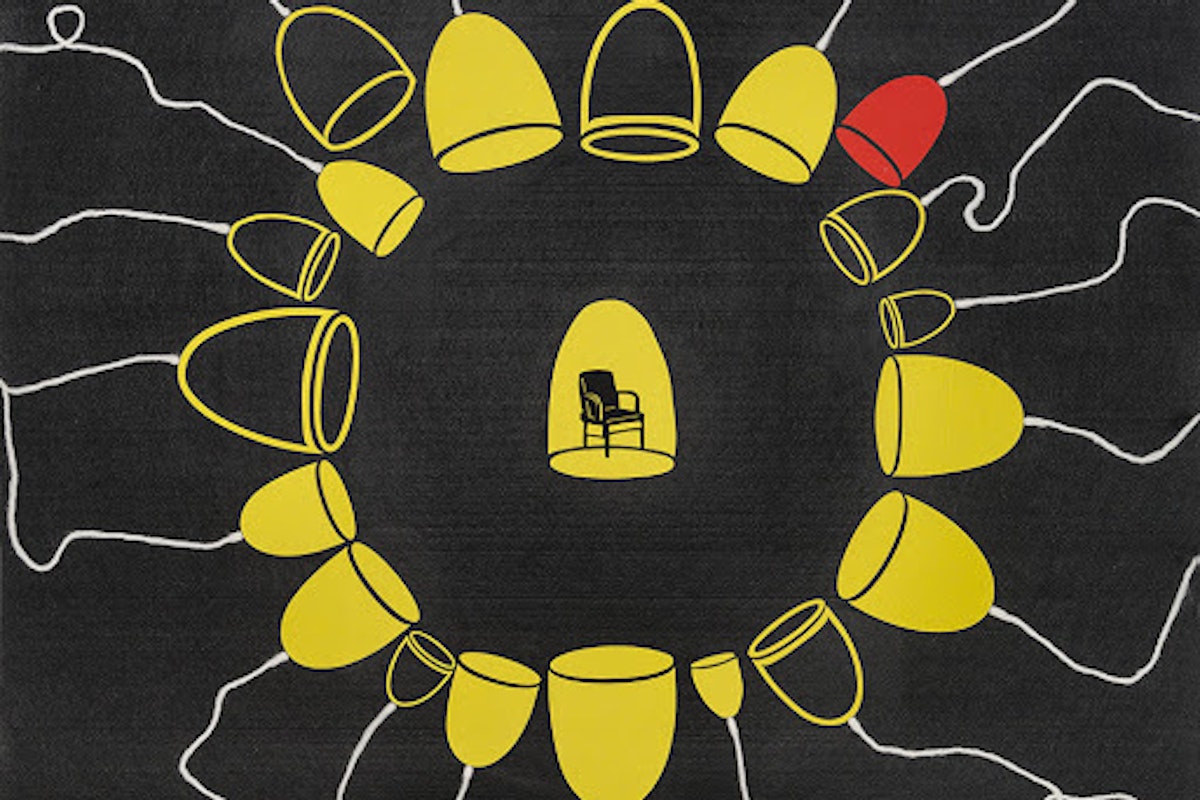 Join us for a book launch and panel discussion in celebration of “Heidi Kumao: Real and Imagined” with special guests Marilyn Chin, Lynn Love, and Wendy Vogel at Stamps Gallery: Friday, September 30 at 5:30 pm.